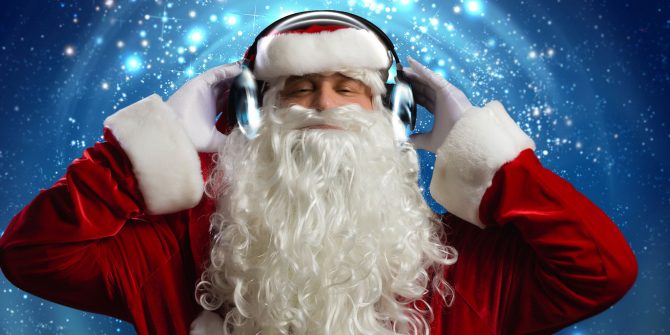 Which Country Plays the Most Christmas Songs On The Radio?

Christmas time is here and once again, hate or love it, the radio airwaves are filled with Christmas songs both old and new. It’s a time-honored tradition taking place across the world, but have you ever wondered if some countries are more ‘Christmassy’ than others when it comes to playing music on the radio? Probably not, but we have! So we decided to do some digging and it turns out there are BIG differences indeed. Read on for the juicy details!

For our little investigation, we looked at a diverse selection of some of the more popular Christmas songs out there to see how they performed on the radio from February 2018 to January 2019. This time period was chosen to give an overview of how much the songs were played over the entirety of a whole year.

The songs in question were:

2. Mariah Carey - All I Want for Christmas Is You

4. MichaelBublé - It's Beginning To Look a Lot Like Christmas

5. KellyClarkson - Underneath The Tree

The first thing to note is that ‘Last Christmas’ and ‘All I Want For Christmas’, released in 1984 and 1994 respectively, are by far the most popular of the bunch. This reflects a wider trend of older songs being more popular than newer ones which isn't hugely surprising since Christmas is a time of tradition and nostalgia.

One thing that was very surprising, however, is how much more likely European radio stations are to play Christmas songs than their American counterparts. Germany, in particular, stands out as an extremely ‘Christmassy’ country in this regard and is by far the country that plays the most Christmas songs. Also in the top ten are countries such as the UK, Italy, and France.

In terms of the total number of plays, the United States is in second place but given the huge size of the country and the large number of radio stations it has, it's very noteworthy that Germany still outperforms it quite comfortably.

Looked at this way, the picture also gets quite interesting in other ways. Small countries such as Sierra Leone, Gibraltar and Saint Vincent now appear in the top ten because although they account for a very small number of plays (around 200 to 100), those plays come from only one or two radio stations making the density of play very high.

This is much different than countries such as Austria, Denmark, Sweden and the UK which are also in the top ten but where Christmas songs are played across a much larger number of radio stations. Interestingly, the non-Christian country of Jordan in also the top 20.

We were actually quite surprised to see how many radio stations there are that are strictly dedicated to playing Christmas music. A majority of the top 50 radio stations to play the chosen songs are 'pure' Christmas channels and it turns out Germany has WAY more of these which explains why the country is so far ahead.

Stations such as the Dutch Netherlands Sky Radio The Christmas Station and Austria's Austria Antenne Vorarlberg Christkind Radio also appear in the top ten, but the large majority are German Christmas stations with Germany Antenne Niedersachsen X-Mas taking the lead with an average of 24 plays of our chosen songs per day.

Looking at which cities play the most Christmas songs, Berlin, Munich, and Hannover make out the top three. And in the top ten, the only non-German cities are London and the Austrian city of Schwarzach. Notably, the relatively small city of Hoboken in New Jersey is also in the top 20 and so is Atlanta, Georgia, and Milan in Italy.

Here again, it’s important to note that cities differ substantially in size and the number of radio stations. After adjusting for this in order to look at the density of plays, the situation changes quite a bit.

We also looked at how Christmas songs were performing on university radio compared to 'regular' stations. It turns out that 'All I Want For Christmas' is more popular among the student population as it is performing better than 'Last Christmas' with a total number of plays of 1565 against 1211 across all countries.

In general, however, university radio is far less likely to play Christmas songs than other radio stations. In countries like Norway, Slovenia, France, Australia, and Singapore, for example, the university stations we monitor did not play a single one of the selected Christmas songs.

The overall conclusion, however, is that European radio is FAR more likely to play Christmas songs than their American counterparts. And both in terms of density and the total number of plays, the clear winner is without a doubt Germany.