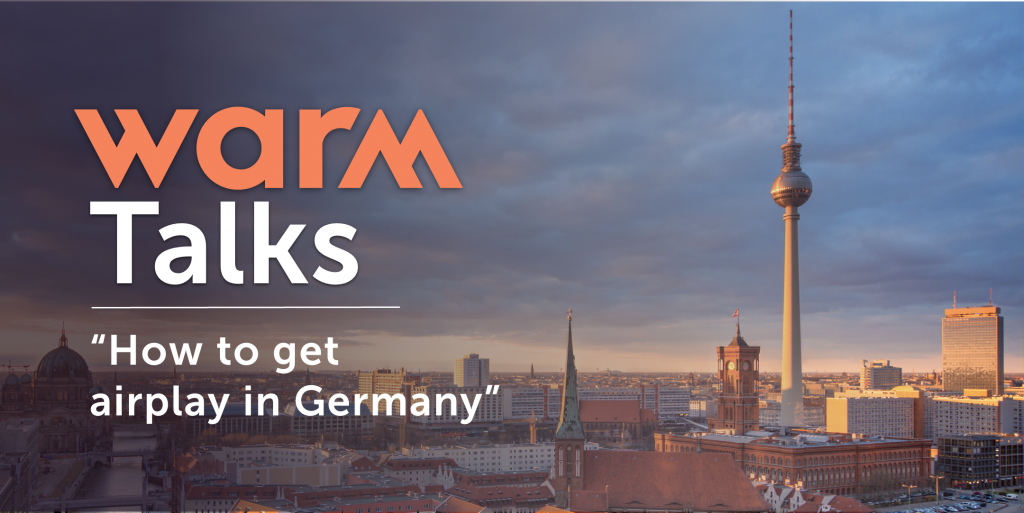 How to get Airplay in Germany

Our third WARM talk featured Oliver Fennel and Andreas Zimmer. They are two professionals who have worked in the German radio industry for more than 20 years. At this WARM Talk they discussed how to break into the German music business with Jesper Skibsby, WARM’s CEO.

The participants of the week

This week we had two new guests, Andreas Zimmer and Oliver Fennel. The host of the week was Jesper Skibsby.

Andreas is a man from West-Berlin with a breathtaking backlist. Despite the fact that he originally studied computer and economic science, he has made himself an inspirational career within radio, television and journalism. His job titles spans from editor, on-air-host, head of music to everything in between and around.

His job career took a turn after his studies where he decided to go for a radio-career as editor in music. He did a 2 year qualification with RTL Radio in Stuttgart and was then hired by Antenne Radio as an editor and on-air-host. Later, he was signed by ONYX Music TV as a music scheduler. Here he continuously took on new roles as editor, station voice, head of music and finally editor in chief. He left ONYX Music TV when he was offered a new position as music editor for the public radio WDR2, based in Cologne.

After some years, Andreas decided to take another step in his career and became a freelance journalist for radio, TV and online media. This has been his occupation for the past approximately 20 years, along with being a coach for interviews and a consultant for labels, PR-agencies, and radio stations.

This is a man with +30 years of experience within the music and radio industry. There is no doubt he knows his way around the German music bizz and buzz.

Oliver is a radio promoter with more than 25 years of experience.
He started out working for the major label EMI Music, but since it closed down he decided to work as a freelance promoter.

He is also the founder of German Radio Service (GRS), which offer to push music to radio and general media in Germany. After a while he found out that this service was not only demanded in Germany, but worldwide. GRS now push music to radio stations in USA, Canada, Australia, New Zealand, UK, Ireland, The Netherlands and Germany!

Oliver Fennel is also a WARM Music representative in Germany, Austria, and Switzerland. He is a man who genuinely understands the importance of knowing where and when songs play on air.

If you look for advice on how to get more airplay on radio stations, Oliver is the guy to ask.

This week's host was Jesper Skibsby.
Jesper is the CEO and founder of WARM and part of the board in MusicDNA. Previously, Jesper has represented MusicDNA in Scandinavia. From 2016-2019 he was part of the board in DUP (association for independent record labels in Denmark).

Jesper has worked in the music industry for 6 years - establishing indie companies like Fandango Music, We Make Noise and Kassiopeia Kollektive.

WARM is the first large-scale airplay monitor, built solely for the purpose of giving transparency to music entrepreneurs. By using the WARM platform and app, independent musicians, songwriters and producers can monitor in real-time any song that is played on radio stations worldwide. Currently, we are monitoring more than 30,000 radio stations in more than 130 countries. This is by far the biggest and widest radio monitoring service on the market.

Do you know if your music is being played right now? WARM knows.